"What began as a joke, ended up being a great employment project and also serving a genuine gap in the market."

The origins of the B-and-Bee concept can be found within two social economy projects. On the one hand, there is Labeur, department Recup Design (a workplace for furniture that is manufactured from recuperated wood) and Compaan, department Con Brio (a cleaning company). "In both projects, we try to work as sustainably as possible. Our cleaning teams, for example, use electric vehicles and work with the most environmentally-friendly cleaning agents possible." 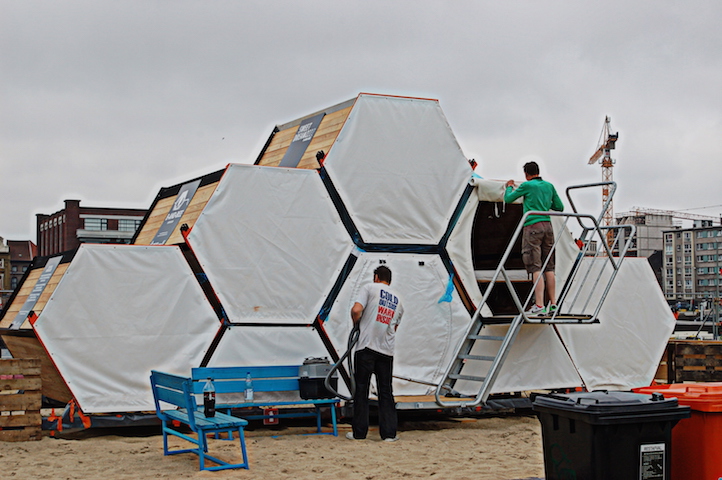 The initial achievement by Recup Design and Compaan was a restaurant in Ghent that started using vegetables from an urban agriculture project in Ghent. In 2013, IN-C, an organisation that supports socials entrepreneurs, organised a conference for social economy. The B-and-Bee project was submitted in this context. It comprised a mobile, stacked and modular sleeping unit that looked very similar in design to the honeycomb structure of a beehive. A crazy idea which some thought was a joke. Nevertheless, Barbara Vanthorre saw it as an integration of the most important collective activities of Recup Design and Compaan.

"B-and-Bee creates employment opportunities because the sleeping units have to be manufactured, assembled on-site and maintained."

To Barbara's surprise, the concept was the winner and she was awarded the funds to make a start on the first trial project. During the initial market research, she was surprised once again. There was a huge amount of interest in B-and-Bee for the festival sector and there are four clear reasons for this:

Experience - There is fierce competition between the festivals. The only way to attract the various spectacular headliners is to offer an all-in experience. Festivals increasingly distinguish themselves, for example, on a culinary level and are therefore very open to great alternatives to the classic festival campsite.

Comfort - More and more May 68-ers are finding their way back to festivals. It is a generation with a lot of disposable income and which also requires comfort when they sleep. Festivals increasingly appeal to an international audience of people who that want to travel as light as possible and prefer not to bring their own tents, airbeds and so on. The honeycomb is fitted with your own double bed with proper mattress that can be folded up into a sofa. There is electricity, heating and the sleep modules are secure and lockable.

Space-saving - Space efficiency is also important for festival organisers. On a surface area of 100 m2, where 27 people could be accommodated on a regular campsite, the B-and-Bee provides 52 sleeping spaces. B-and-Bee is the only modular camping concept that also rises upwards.

Sustainability - One thing that really bugs festival organisers is the increasing garbage pile of low-budget tents that are left behind after the festivities have come to an end. This can be avoided with fixed structures. 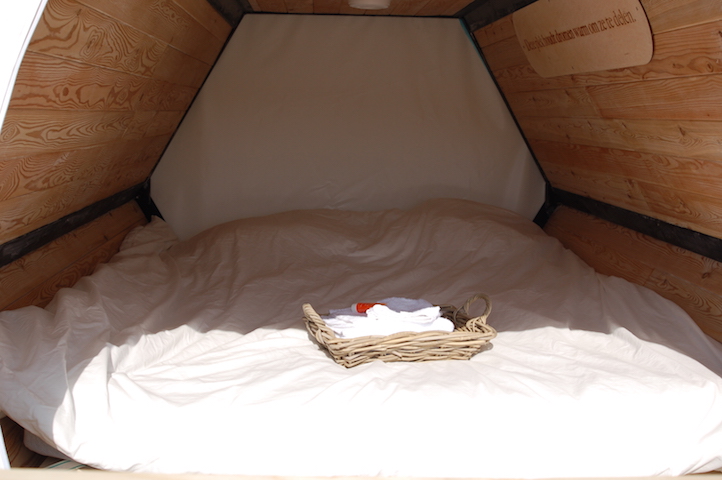 On the basis of the Recup Design activities, there was a desire to make the structures from recycled wood. The guidelines concerning fire safety, however, did not permit the use of waste wood. The wood had to be appropriately fire resistant. B-and-Bee was successful in using a range with the FSC quality label for sustainable forestry.

With a subsidy from the IWT and external design consultancy Achilles Design, the first generation of B-and-Bee mobile accommodation was developed. During the Gentse Feesten 2014, the first six prototype units were tested in practice. From season 2015, B-and-Bee would like to use the lessons learnt to create capacity for 252 guests. In March/April 2015, a company was founded with the non-profit organisations, Compaan and Recup Design as the biggest shareholders. Tent manufacturer Veldeman from Bree has also become an important industrial partner for B-and-Bee and provides a great deal of know-how.

"A sales model is, of course, an option but a rental operation offers greater employment opportunities in the current business model and this more effectively connects into the initial mission of Recup Design and Compaan."

B-and-Bee has been asked whether the units can be sold from a range of very unexpected areas. Hotels, airports and homeless organisations see B-and-Bee as a flexible solution for expanding capacity rapidly. 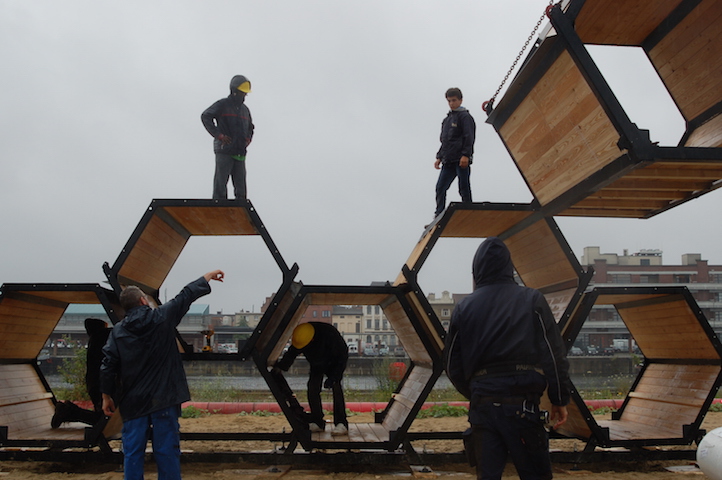