Across the world, they wipe their feet on recycled mats

For the past 30 years, Verimpex has been making and selling entrance mats from recycled aircraft tyres. Nonetheless, there has been very little coverage of this process. And this is a great shame as it is a Flemish highlight when it comes to the circular economy. But even the customers aren't aware of this fact. The name TireGuard® offers some clues. "The entrance mat is technically just as good as those made of new rubber but is an average of 10 to 15 percent cheaper."

"The entrance mat is technically just as good as those made of new rubber but is an average of 10 to 15 percent cheaper." 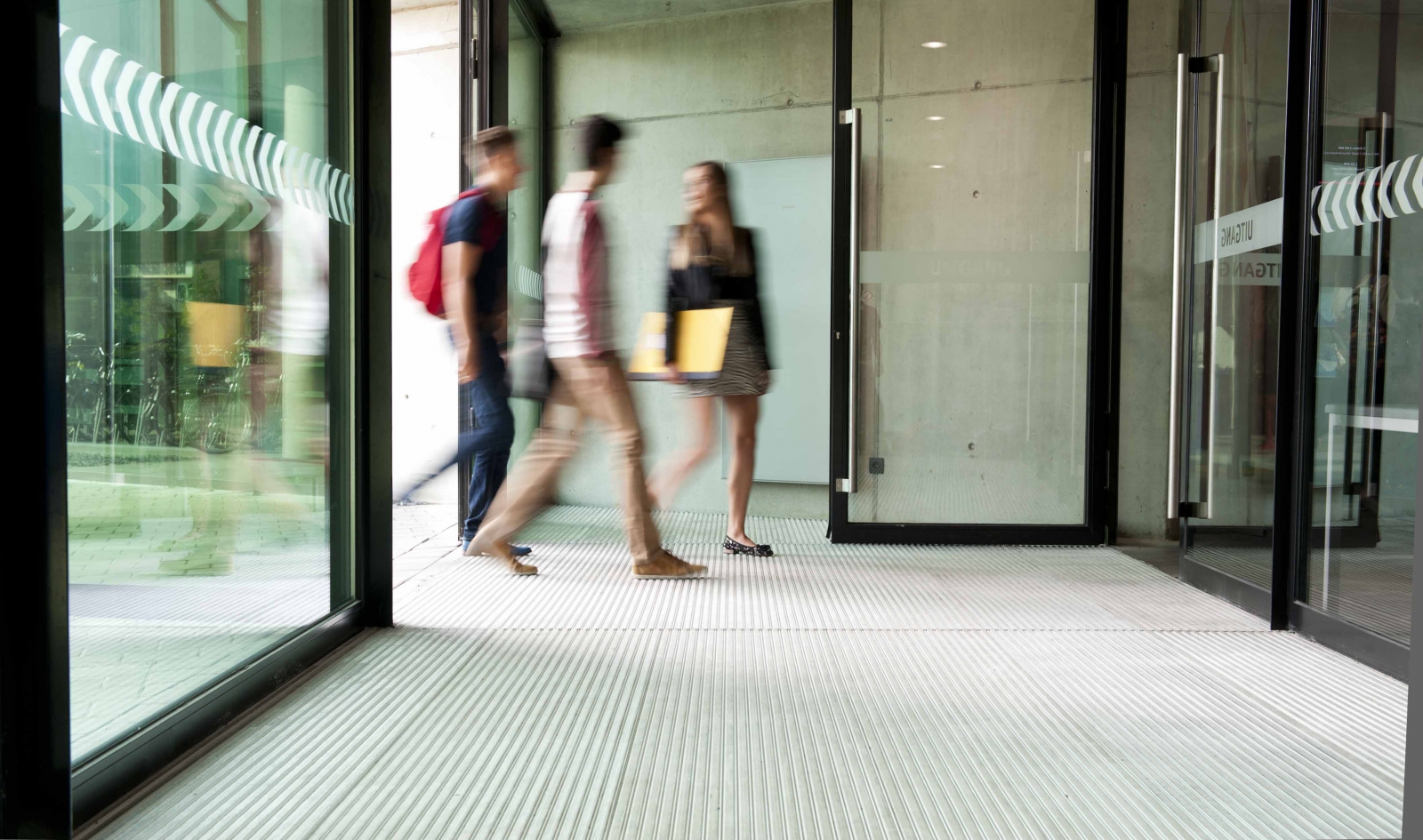 Verimpex was not the first but is currently the only company to apply the production process of stripping aircraft tyres. The only competitor stopped because the supply of aircraft tyres was likely to dry up in the future. The fact that Verimpex has the technology in-house means that it is less dependence on suppliers and fluctuating raw material prices.

The tread of an aircraft tyre is around 5 cm thick. After around 30 landings, the rubber layer is worn. The tyre is refurbished with a new layer around 7 times and is completely worn out after around 210 landings and/or one million flying hours. The rubber layer, which is reinforced with nylon fibres, is however, still top quality. Verimpex cuts the tread into strips and a millimetre of rubber is removed from the sides with a buffing machine so that the nylon fibres are released. What remains of the tyre, such as the sides and the fibrous layer are recovered by the tyre producer.

"Verimpex continues to innovate and always goes a step further when it comes to recuperating material from the tyre."

Despite intensive usage, a doormat can last up to 30 years. There are even 'third life' mats. This is a small-scale test and investigation into whether it is feasible to recover old mats and then clean the strips and cut to standard sizes and sell and use them once again. The most important barrier to the reuse of system mats is the exact connection in the flooring framework. There is a tolerance of just 3 millimetres. Mats that are being thrown away end up in a process that is principally focussed on recuperating the aluminium profiles and the steel wire. Verimpex offers this form of recuperation but the service is rarely used. 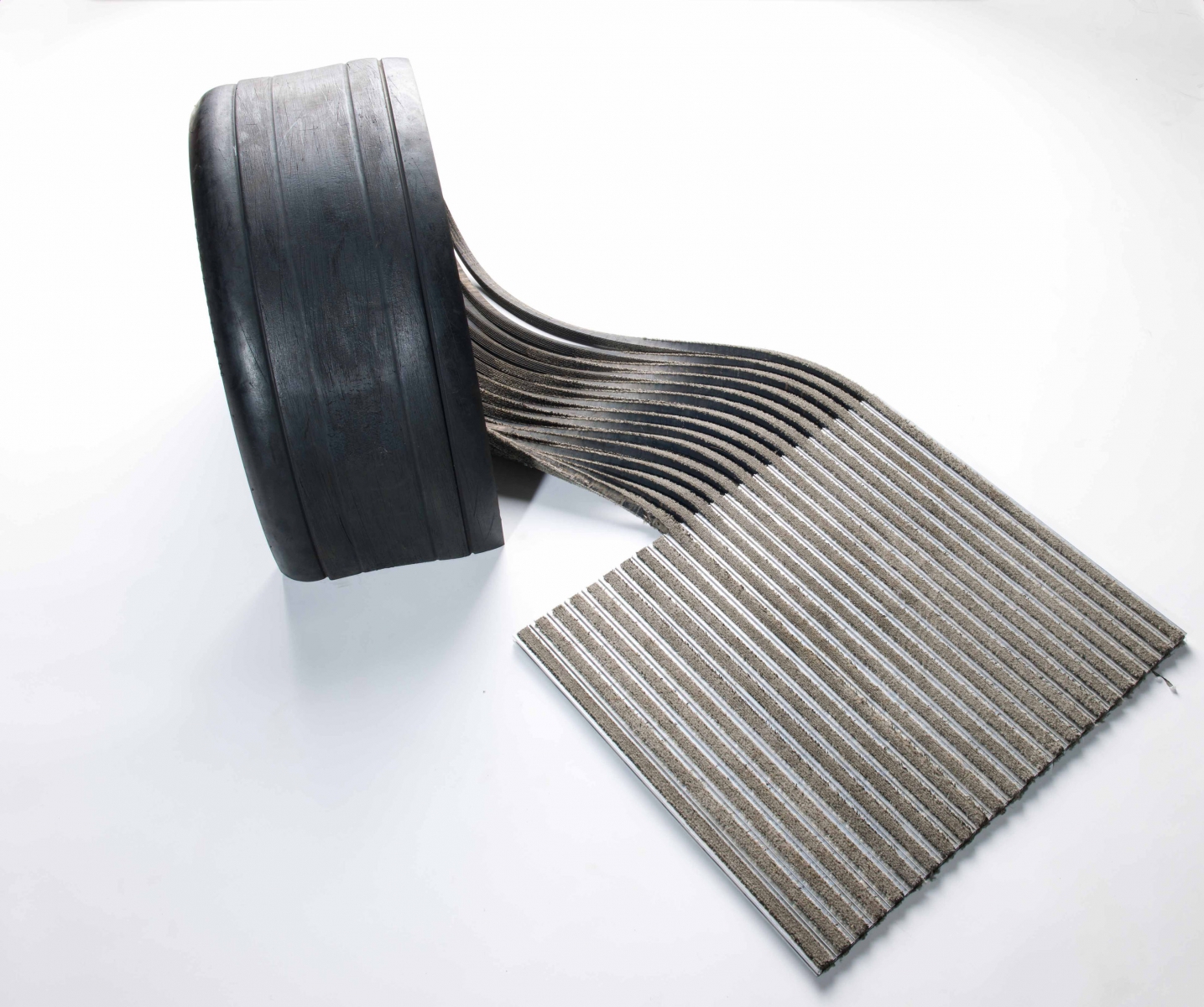 "The main argument for rubber system matting is the low Total Cost of Ownership (TCO) because of the long life."

Nevertheless, it is not always easy to convince all parties. Moreover, much depends on the prescribing behavior of customers and architects. For example, Germany prefers no recycled material but mats based on felt. However, they have a much shorter life, in locations with medium or high course they are after 2 or 3 years already trampled. Especially the Netherlands are system mats-minded. In Belgium, they prever loose change mats. Banks and retail chains such as Inno and Colruyt do consider TCO and sustainability.

Verimpex is a relatively small producer, which distributes through major distributors. Volume is therefore the key for further growth. Verimpex believes in strong growth as a manufacturer and supplier of materials for mats, so a downshift in the chain. As the only producer of strips based on recovered tires, Verimpex has a strong trump card.